Where Should Your Dog Sleep? 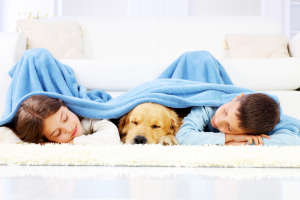 Knowing full well that a child with a dog has found a family friend for a lifetime, and you would certainly never want to do anything to discourage that relationship, should you let your family dog sleep with your child?  If you’ve got one of those little teacup dogs, your child could rollover on top of it and suffocate it.  With a larger dog, such as the German shepherd, that would certainly never be a problem and German shepherds are typically mild-mannered enough for the job.  But, is it good for the child and the dog?

Your dog usually gets about twice the amount of sleep that you do every day. They sleep in crates, on couches, in chairs, on the floor, in dog beds… Many sleep anywhere they please. Then of course they would love to be sleeping not just in your room when you’re sleeping,  but right next to the bed, if they can.  Some trainers will tell you that letting that brand-new puppy sleep in bed with a humans is one of the first mistakes that can be made as a dog owner.  They talk about dominance and the fact that the dog now feels equal to its human, thereby not feeling that it any longer has to obey the human’s orders.  They even go so far as to suggest that your dog may actually assert a more aggressive behavior toward you feeling that you can be challenged, as the leader of the pack.  That’s what the ‘experts’ say.

A Boy and His Dog

That could read a girl and her dog as well but regardless, the bond between a child and the family dog is, 9.5 times out of 10, an unbeatable and unbreakable one.  Most dogs would go to the ends of the earth, for a child in the home in which they live be it protecting them or snuggling up in bed with them.  Dogs simply aim to please. They depend on us not only for food and exercise, but for love and companionship… as we do them.

Of course you never want your child to be subjected to fleas, just because they slept with your dog, or other illnesses, for that matter.  Ideally however, your dog is not going to have fleas or other illnesses, particularly considering all the remedies that can be found in pet stores and veterinarians offices.  Choosing where the dog sleeps is of the utmost importance to the family  continuity, as you do not want the dog roaming the house at night, while the family is sleeping away.

This entry was posted in German Shepard, Puppy, Training and tagged dog and child, Dog Sleep Arrangements. Bookmark the permalink.